…or is he just really crap at cutting videos?

In a previous post I mentioned the sh+t fight between Durianrider vs Paleo. When I linked to his blog, I found a video of him attacking Mark Sisson and the overall Paleo community for about 10 minutes.

There was this other video behind it, and I have to admit I watched it … the video is very funny (not intentionally). Anyway, the vid is pretty dark, but from time to time there are some flashes of colour – which made me think of subliminal messaging that I read about in The Hidden Persuaders ages ago. So I space-bar’d my way through at around 2:43, and guess what I found (…took me a number of attempts…) 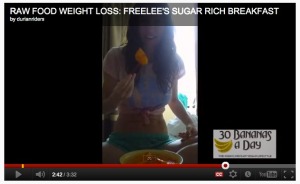 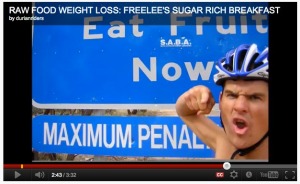 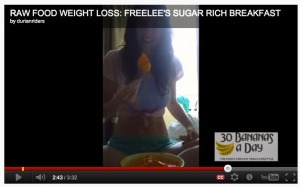 Here is the vid – judge for yourself.

The insert is a bit too long not to be noticed, but too short to be read. And the pic is kinda silly. So let’s say it is just a really funny hoax. Har har. What is your view? Lack of video cutting skills? Hoax? Or subliminal messaging?And if it is the latter – did he do the same in his  have-a-go-at-Mark-Sisson-vid ?